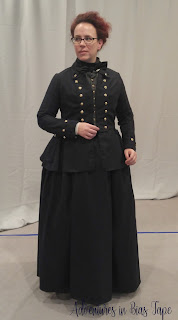 I'm not precisely sure when I decided that I needed a riding habit, but once the idea was there, it needed to happen. It's been on my to-do list since at least 2015. I had a copy of the Tailor's Guide Riding Habit pattern, as well as Reconstructing History #830. I'd even gone so far as to start a waistcoat from RH830. It needed some work - the armhole was too narrow at the front of the arm, and I think I had to cut the neck down a bit. I made it out of a poly brocade and linen back, used the interfacing of my curtain-along gown tie-backs to stiffen the fronts, and got hung up on how it was lined? WAS it lined? If I didn't line it, did I just narrow hem the exposed edges? It's been sitting in the naughty pile for a looong time.

Before CoCo '17, after class descriptions were out but before I'd signed up for the riding habit class taught by JP Ryan, I decided to make a mock-up of the Tailor's Guide pattern. It was WAY too large - even without stays on, I had considerable overlap at the front, and I immediately gave up on it. I could not be bothered to try and wrap my head around it, and then signed up for the class. If I got in, great; if not, I would figure it out somehow.

Luckily, I did get into the limited class, which included personalized fitting instructions. The limited class size meant that she could spend time with each of us helping fit the patterns as we went, a very valuable experience! Myself and three others were grouped together as we all had similar and potentially time-consuming adjustments to make.

Since I am small-busted compared to my waist and hip measurements, my adjustment was to take a slice up the front pattern piece, move it out, and take the excess out as a dart through the chest. (In a perfect world, this adjustment would be halved front and back, but all my “extra” is “forward thrust”, so I only made it to the front.) For the vest, this just meant a shorter front overall, and the gap created between the two was smoothed out with a French curve. For the jacket, I repeated the adjustment, and as there is a dart across the bust, it just became smaller.

My in-class mock up went well, and I needed no special adjustments once it was sewn. When I got home, the project was placed on hold as I had no pressing event to make it for.

Finally, in spring 2018, when I knew I wanted to wear it at CoCo, it was time! I had enough of a navy wool blend in my stash for the habit, and I found a length of a grey wool blend that has been in my stash for over 10 years to make the waistcoat out of. I opted to machine sew everything together, as the directions were written for that, and also because I had to keep reminding myself - did I want it done “right” or did I want it DONE? DONE is something I struggle with a lot, so that became my mantra. DONE > “done right”. 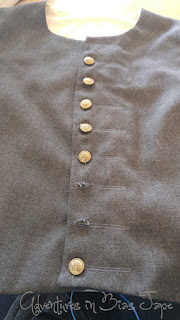 The waistcoat is lined in a medium-weight linen, and I faced the center front edges with a strip of maybe-silk-but-probably-poly fabric that came from the uneven edges of a petticoat I made earlier in the year. I waited to put the buttons on until I had the jacket done. Because of the machine sewing, and even with some hand finishing, it was done in 2 evenings. 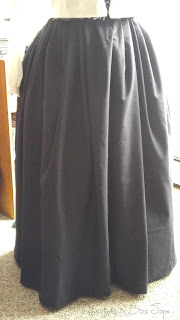 For the petticoat, I cut the panels as directed in the instructions, but in the future I would make it more like a regular petticoat, as it was nearly identical, but fussier. It has the sides sewn up and the halves pleated to a band, and then you must put the skirt on and pin the hem until it’s even. Since my hem is close to 120”, this was really tricky, not to mention I often sew alone! 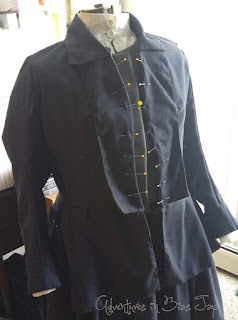 The jacket was next, and was naturally a lot more complicated. The instructions are for bag lining, but I chose to do the backs and back linings in one, using a pretty gold-green poly lining fabric from my stash. The side backs were basted down and then the seams from the front were folded over and whipped down by hand. I put the pocket linings in backwards and didn’t realize until it was too late.

Because I was using polyester and a wool-poly blend, I was scared to use too much heat while pressing. I pressed as best as I could, and then ended up doing the running hem stitch by hand on every hem. If I make another one with this mix of fabrics, I will probably do these edges by hand.

For the multitude of buttonholes on the lapels, pocket flaps and cuffs, I did all the cuff ones (six) by hand… which took an hour each. For the lapels and pocket flaps, I had MANY MANY MORE, and DONE was better than “done right”. I got to experiment with my buttonholer, as each one was MUCH longer than the holer itself, so I didn’t even use it, and instead just used the function on the machine, tapping the bar where marked to make it run back the other way. 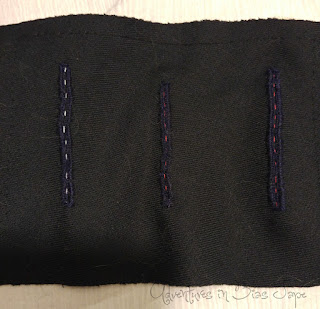 The sleeves are the best fitting sleeves I’ve ever made in my life, and were the easiest ones I’ve ever set. I wish I had thought to adjust the lapel before attaching it, as the shallower dart did change the length of the front and I ended up with some seriously thick seams at the neckline. I ordered buttons on Ebay, but unfortunately mis-read how many I needed, and the waistcoat has different buttons.

The last thing I needed to do was hook and eye to keep the front closed, and while I had purchased some in LA during CoCo, I couldn’t find them! I put on a few small ones, just to the lining as I didn’t want to spend time putting them in when they weren’t the ones i had specifically purchased for it, but hated how they behaved, so this is one of the first things I will fix when I get around to it. 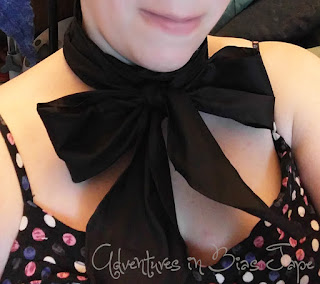 The final piece I needed was a cravat. I had some nice lightweight, lightly bodied black fabric, which I have since determined is silk. One side had a piece cut out of it from the fold, which was the perfect height for a cravat. I cut another strip the same height, and whipped the selvedges together. Then I hemmed it all by hand. It is so long, but such a delightful bit of sexy neck action, and I love it. 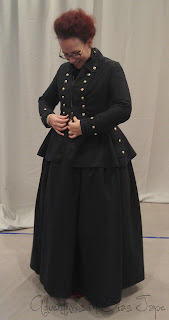 I wore this at CoCo 2018 over the usual undergarments and a quilted petticoat. I had my pocket so perfectly placed that i could stick my hand straight in it through the slits. I found the jacket pockets too shallow for my modern necessities. Katie Lovely wore her Regency riding habit, and we got some photos together of our matchingks :3 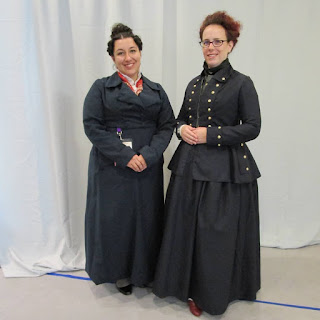